Insider Warns: It Is about to Hit the Fan -- Things are about to Get Very Ugly

New Information Confirms There Is A Major Political Reckoning On The Horizon And Things Are About To Get Very Ugly - Insider Warns: IT Is About To Hit The Fan May 20, 2018 Source: All News PipeLine | By Susan Duclos 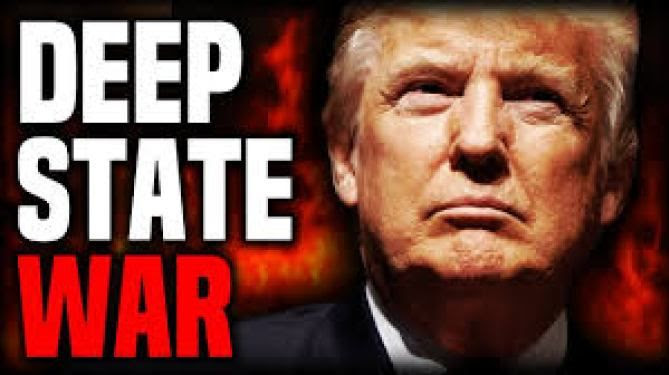 Part 1: MSM Desperately Starts Spinning And Distracting From Huge News Revealing FBI Spy Infiltrated Trump Campaign To Frame Him Before Russia Probe Began Part 2: The Fallout- After the media went into meltdown mode in order to spin and distract from the blockbusting news that the Obama administration, via the intelligence agencies under his control, did indeed order surveillance on the Trump campaign before the official"Russia investigation" began as well as before and after the 2016 presidential election, a rapid series of articles, legal opinions, and reactions followed. One of which, perhaps the most in-depth and objective, came from Shapiro Professor of Public Interest Law at George Washington University, Jonathan Turley. I say Turley's reaction and commentary is the most objective because Turley is not what anyone would consider a "Trump fan," or on the "Trump train," but has always provided fair and balanced analysis on the legalities and optics of the whole Russia-gate issue. Turley's piece over at The Hill is titled "After year of investigation, Trump can rightly claim some vindication," in where he describes the most recent revelation that had the media immediately spinning tales, offering justifications, making sure to provide a take that categorically seemed "sympathetic" to the "deep state," all the while ignoring the ramifications of a sitting administration targeting a candidate from an opposing political party for surveillance, giving the appearance that much of the intelligence community was being used as a political tool to prevent the opposing party's candidate from winning a presidential election. Turley on why he feels President Trump "can rightly claim some vindication": The New York Times this week disclosed that the FBI made a conscious effort to use secret counterintelligence powers to investigate Trump officials and may have had a confidential informant who was used in connection with key Trump figures long before the November 2016 election. (Officials stated anonymously that this was a longstanding source who worked with both the FBI and CIA for years.) In early 2017, President Trump was widely ridiculed for alleging that the Obama administration placed his campaign under surveillance. The response from experts on CNN and other sites was open mockery. Former Director of National Intelligence James Clapper came forward to assure the media that he could categorically deny the allegation and stated, “There was no such wiretap activity mounted against the president, the president-elect at the time, or as a candidate, or against his campaign.” The range of media analysis seemed to run from whether Trump was a clinical paranoid or a delusional demagogue. We now know there was, indeed, surveillance ordered repeatedly on Trump campaign figures before and after the election. Rather than acknowledge the troubling implications of an administration investigating the opposing party’s leading candidate for president, the media shifted to saying that there was ample reason to order the surveillance. While the entire article is worth the read, we will jump straight to Turley's concluding paragraphs, which leads us to the instantaneous reaction to president Trump's announcement from today, which seems to have sent the MSM into yet another tailspin. As a nation committed to the rule of law, we need a full and transparent investigation of these allegations. All of the allegations. That includes both the investigation of special counsel Mueller and the investigation of these latest allegations involving the FBI. For many Trump supporters, this new information deepens suspicions of the role of the “deep state.” If we ever hope to come out of these poisonous times as a unified nation, the public must be allowed to see the full record on both sides. Until then, many Americans across the country will continue to believe that, like “Jumpin’ Jack Flash,” Trump was greeted after his election by being “crowned with a spike” right through his head. Transparency. Legal experts, Trump supporters, congressional Republicans on oversight committees, have all been demanding transparency. The FBI and DOJ, have blocked congress from accessing documents, to the point where they have threatened to subpoena them and hold members of the intelligence community in contempt of congress for their refusal to provide the documentation needed for them to provide the oversight they are charged with. 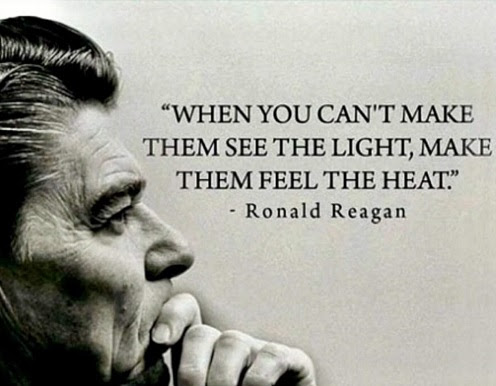 Well, this morning, as part of a series of hard-hitting tweets, President Trump made an announcement that has Washington Post, the intel community mouth-piece, melting down. Trump said "I hereby demand, and will do so officially tomorrow, that the Department of Justice look into whether or not the FBI/DOJ infiltrated or surveilled the Trump Campaign for Political Purposes - and if any such demands or requests were made by people within the Obama Administration!" In response to that particular tweet, former United States Secret Service agent Dan Bongino, predicted "Excellent! The s%^* is about to hit the fan. Watch the media desperately try to insulate Obama as the disturbing truth about the police-state Obama administration comes out." 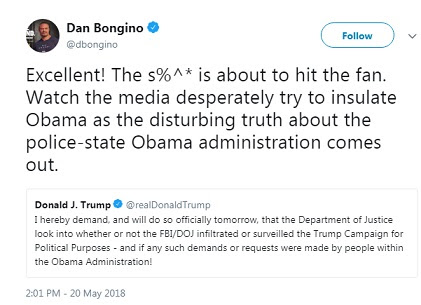